The Olympic Peninsula is a great place for salmon fishing as you can find all five species of pacific salmon here.  You can fish for salmon a couple different ways; either stripping flies out of the boat, or wading with a single or two handed rod.  Salmon are aggressive and like to chase flies which makes for exciting fishing. 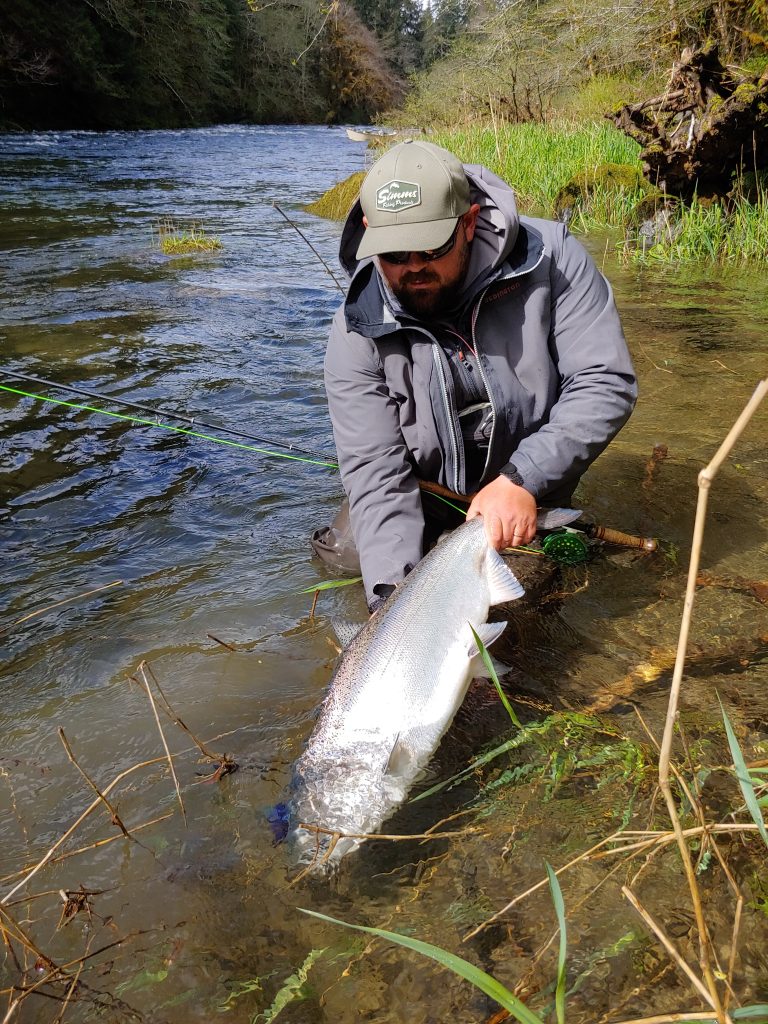 Chinook (king salmon) are the largest of the salmon species, weighting 15-40 lbs when they enter the rivers to spawn and considered mature at about 3 feet in length.  The largest run of Kings is in the fall, and can be found in all in many of the coastal rivers. There are also smaller spring runs in the Hoh, Queets, and Quinault Rivers, and summer runs in the Hoh, Queets, and Quillayute Rivers.

Coho (silver salmon) are the most plentiful species on the peninsula, they can be found in most of the rivers in good numbers. The runs go throughout summer, but primarily in late September to mid-November.

Chum salmon do not return in large runs on the Olympic Peninsula, though you might have a chance at finding decent numbers in the summer or late fall on the Queets River and the Quillayute River. Chums are generally 5-15 lbs when they return to the river and while in fresh water they make a pretty dramatic change in appearance.  They enter the river a bright silver and quickly change to a darker color with rust colored strips.

Pink salmon are the smallest of the five species weighting in at 2-9 lbs on average.  Most pinks in Washington return on odd years, usually to the lower rivers from July to September.  When returning from the salt water pinks will not change color as dramatically as the other salmon species, but the males will develop a large hump on their backs giving them the nickname “humpies”.

In the Quinault River, sockeye can be observed spawning in November and December in tributaries and in the river.  Lake Ozette and Lake Crescent both have populations of “landlocked” sockeye called Kokanee. They spend their entire lives in the lake and are smaller than the anadromous version of sockeye. The anadromous stock of sockeye in Lake Ozette Lake is listed as threatened under the Endanged Species Act.